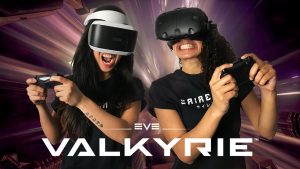 Eve: Valkyrie is an action packed space combat shooter in virtual reality. You have to train and become an elite space fighter pilot and become the best in player vs player (PvP) combat. This game is a seated vr game, because you are sitting in a space ship in vr as well. So it’s actually quite immersive and fun! You can play with HTC Vive, Oculus Rift and PSVR players together, so there is always someone to play with. You do need a XBOX controller to play this game on the PC though.

Business inquiries or questions? You can email us at hello[at]casandchary.com